More than 70 people came through the door of St Peter’s Hall, Paekākāriki on Sunday (15-7-18) to sample the family-focused fun on offer.

Organised by Low Carbon Kāpiti as part of No8 Wire Week, the Midwinter Hullabaloo had activities for all ages and abilities. 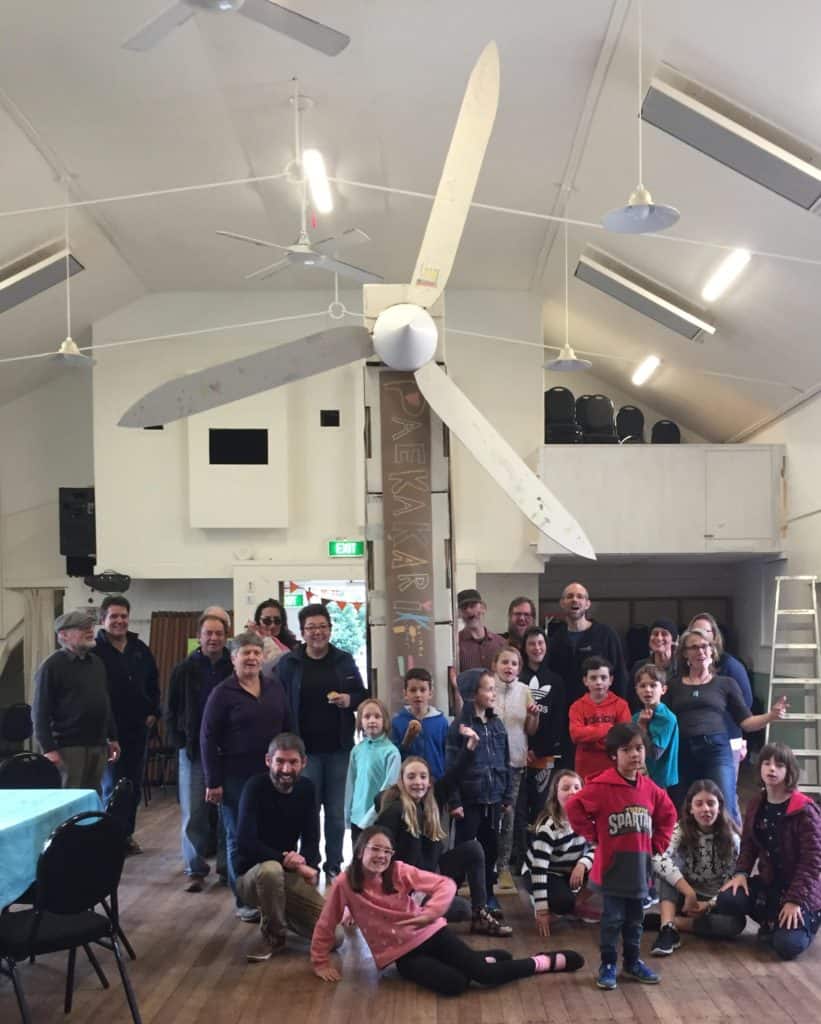 Centrepiece was the giant cardboard and bamboo wind turbine (pictured with a group of happy builders) that took shape during the two-hour event, built and decorated to show support for renewable energy and the Paekākāriki Wind initiative.

The idea was to have a low-stress event for kids and families to explore different ways to play as a community which don’t cost the earth, said Jake Roos. Activities used mostly donated materials and the event created virtually no landfill waste. Bike boxes from the team at Avanti Cycles and specialty paper to decorate the wind turbine from Allen Paper were particularly valuable contributions.

“Like everything we do it couldn’t have happened without the support of members and tutors who offered their time. Low Carbon Kāpiti is a grassroots community organisation that aims to encourage the district to implement climate change solutions that bring multiple benefits to the community.”

The Hullaballoo came off the back of a win at the Kāpiti Community Awards, he said.

“It was great to see Low Carbon Kāpiti win the Heritage and Environment category at the awards, a tribute to all our members who work so hard in many different was to encourage change.

“It was also great to see other volunteers and groups being recognised, including our own member Viola Palmer and the other group she is part of, The Friends of Greendale Reserve.

Formed in mid 2017, Low Carbon Kāpiti has undertaken many projects in its first year include lobbying for the inclusion of climate change in the Council’s long term plan, supporting a safe design for the former state highway in Waikanae, supporting the Peka Peka to Ōtaki shared path, holding a candidates panel on climate change in the run up to the general election, arranging electric bike and car test drives and working with young people to build a model of a ‘low carbon’ Kāpiti Coast in the year 2025 from Lego bricks.